Do you want to travel to Karimunjawa? Excellent, go for it! Karimunjawa is an amazing place on earth. Here are our travel tips.

Karimunjawa Islands Indonesia Paradise Of Java, How to Get There, Here The Best Tips and Time  For Traveling to Visit Karimunjawa, Info Guide, From Jakarta - Semarang - Karimunjawa.

The best period for travelling to Karimunjawa is from the end of February until the beginning of December or As the rest of Java, Indonesia of a tropical climate, the best time to go Karimunjawa would be during the dry season of April to October where the weather would be consistent sunny but humid. Outside this period the boats can be a little bit unreliable because of the raining season. For more information about Karimunjawa’s travel period send us an email with your considered arrival dates and let us know if you have any concerns. We will give you a fair picture of risks and weather conditions.
To be honest: Karimunjawa is worth every effort. In short, the island is one of the most amazing places we’ve ever traveled to. These are our best tips for a trip to Karimunjawa. Most people travel to Karimunjawa by boat. There are three harbors in the North of Java: Semarang, Kendal and Jepara. We only travelled from Jepara’s harbor as it’s more frequent.

You can either take the slow ferry or the speedboat. You’ll find the estimated arrivals and departures on this website, but please note that the times can change. Our ferry definitely left before 7 o’clock. We advise you to check if there even is a boat (wind, weather, whatever) and if yes, when it will be leaving. If you decide to go with the speedboat (we’ll talk about the advantages and disadvantages later), you better call the telephone number on the website above. If you go within high season, you also better call the harbor and ask them to book at ticket for you.

The slow ferry takes about 4 hours whereas the speedboat only takes 2 hours. We felt a lot safer on the slow ferry, although the big ship waved a lot (so does the speedboat). Traveling with the speedboat really scared us…. Fun fact: Plastic bags are included in the rate and are delivered by the cabin crew.

Both options, the speedboat as well as the slow ferry, are not expensive: The ticket for the ferry is about 100.000 IDR, going by speedboat will cost about 200.000 IDR. Always check the waves before travelling. You can download the forecast here. Short explanation: Try to avoid pink areas around Karimunjawa.

When all the other boats left, there is another option: You can charter a small fishing boat. This is actually no joke: We met a group of Germans who did so. It took them 8 hours on a tiny boat. On top of that, the motor broke on the high seas. Moreover, this horrible trip wasn’t cheap: they paid 7.000.000 IDR. Think twice before traveling with a fishing boat to Karimunjawa.

There are regular ferries from Jepara, Semarang and Kendal, except during the monsoon season from December to February when the waves may be too high for a day or two, except in severe cases like on December 31, 2014 when about 500 tourists could not go back to Java due to 3.5 meters high waves and the ATMs ran out of money after 3 days, because some of the coal cargos also landed to avoid high waves and its crew also use the ATMs. Cash for at least 5 days should be prepared.

From Semarang
Tanjung Emas Semarang is popular port for going to Karimunjawa, closer distance to the city of Semarang. At the moment the boat only departs 2 days a week from Semarang. If you wish to travel from Semarang, tickets have to be bought in the harbour before departure of the boat or you can book here.

From Kendal
Since the end of 2016 there is a fast boat from Kendal available. Kendal is at a closer distance to Semarang. At the moment the boat only departs 2 days a week from Kendal. Unfortunately we are not yet able to arrange tickets for this boat. If you wish to travel from Kendal tickets have to be bought in the harbour before departure of the boat.

Express Bahari, ☎ +62 821 3817-2799 (Jepara & Kendal), +62 297 312333 (Karimunjawa). Departing Kendal for Karimunjawa at 08:30 on Tuesdays and Fridays. Departing Karimunjawa for Kendal at 12:00 on Wednesdays and Sundays. Kendal is the town immediately to the west of Semarang, reachable by bus and train. The crossing is scheduled to take two and a half hours; traveler feedback indicates three to four hours is more realistic VIP tickets Rp260,000. (updated Oct 2017 ).

Another option
Another option is to fly from Surabaya with Airfast. The plain has a capacity of 12 seats only. Tickets can be bought at the ticket counter of Airfast in Surabaya only. At the moment (January) the Airfast plain from Semarang is no longer flying, service flights will be available on a regular basis from April to December. Airfast, ☎ +62 82138172799 (Semarang) +62 812 3777-9614 (Karimunjawa).

There are flights with Airfast from Surabaya to 1 Dewandaru Airport on Kemujan.
Airfast, ☎ +62 812 3777-9610 (Surabaya ), +62 812 3777-9614 (Karimunjawa). Departing Surabaya for Karimunjawa at 12:25 on Tuesdays and Thursdays, arriving 13:35; departing Karimunjawa for Surabaya at 08:00 on Mondays and Wednesdays, arriving 09:10. Tickets may be ordered over the phone, but must be paid for and collected in person at the airport of departure. The system seems to be the one who pays first gets the ticket, so even if you order a ticket over the phone, it is not yours until you pay for it. Rp379,900 single for flights from Surabaya to Karimunjawa; Rp309,900 single for flights from Karimunjawa to Surabaya. (updated Oct 2017). 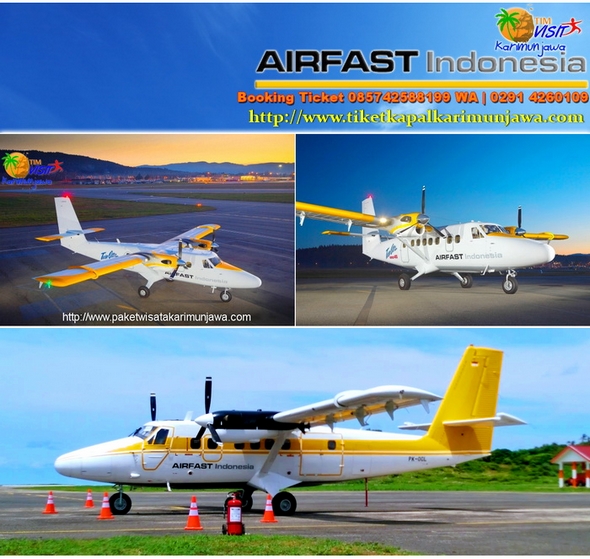 You will need your passport to purchase tickets, and should arrive a good hour prior to departure. Try to book several days in advance for weekends and holidays as tickets sell out. Guesthouse and tour operators on Karimunjawa can help prepurchase tickets for a small fee.

Note: Schedules can change regularly and services are cancelled if there is inclement weather. In other words, a two-day visit can turn into five if the weather is bad enough.

On Karimunjawa and Kemujan, you can rent cars or motorcycles. To get to the other islands, you can use a local boat or motorboat. It might be a good idea to book a rental car before you arrive in Karimunjawa because there are few cars there.

There is no public transport at Karimunjawa, that’s why you’ll need a scooter to go around. The rent is about 75.000 IDR per day. There are no helmets at Karimunjawa: “No helmet, no police, no problem” like the owner of our Guesthouse said. The roads are sometimes in really bad condition but there is hardly any traffic except the neighborhood kids on their bikes.

You can easily reach a lot of beaches with your scooter. Go to Tanjung Gelam Beach for nice sunsets. If you want to feel like Robinson Crusoe, head to Barakuda Beach and try to open coconuts with bare hands. Don’t miss the beautiful small islands around Karimunjawa. You can reach them with a fishing boat. A snorkeling day trip is 200.000 IDR per person. The island beaches and beautiful coral reefs.

Many resorts in Karimunjawa, such as Kura-kura resort, provide diving activities. There are many interesting local spots for diving, like Taka Panyawangan and Gosong Cemara. There are some shipwrecks that attract many fish and divers alike. You can also go hiking around the island to find many places where there is a beautiful panorama.

Surrounded by sea, Karimunjawa offers lots of seafood. Fresh fish and prawns are staples in the island diet. Restaurants are located within hotels. Other eateries, or warungs, provide decent cheap food like fried rice, fish, or an assortment of veggies. Be flexible and you'll do fine. There are various kinds of accommodation there, from the four star hotels to homestays. There are also camping sites.

Last but not least we’re gonna show you some pictures of this divine island. Go there before it’s run over by tourists!