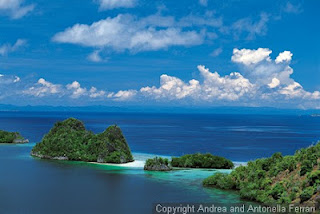 Publications is a chain of 27 islands north of Semarang, which is included in Jepara Distric, off the coast of Central Java, Indonesia. Designated as a national marine park.
Publications consist of small islands, with the main ones being the island of Karimun, Kemujan Menjangan Besar island islands, and Small Menjangan island. With the vast waters of ± 110,000, and ± 1 500 hectares of land, Karimunjawa now developed into a tourist charm Marine Park, which is now beginning a lot local and foreign tourists liked.
Based on the legend that circulated in the islands, the island was discovered by Sunan Muria Karimunjawa Islands. The legend tells of Sunan Muria are concerned about the naughtiness his son, Amir Hasan. With intent to educate, Sunan Muria then ordered his son to go to an island that appears “kremun-kremun” (blurred) from the summit of Mount Muria. Because it Appears “kremun-kremun” then called the island of Karimun Island.

Karimunjawa Map
Most islands have a low level , with a sandy beach. There are some mangroves around the edge of the island Kemujan. We can find various types of marine animals, such as fish, sharks, and turtles in the territorial waters of Karimunjawa. On the mainland, especially in Karimunjawa island, and i Kemujan island, we can find various species of birds, deer, and even snakes. Tropical. dry season (approximately May to October) and wet and humid in the rainy season November – April.

Karimunjawa, How To Get There ?

There was a plane chartered from Ahmad Yani Airport in Semarang, who flew from Semarang Airport Kemujan Dewandaru Island. with aircraft lease type Airfast Indonesia. It takes about 30 minutes. 12 seats: 200.5 U.S. $.
There are also regular ferries that sail from the port of Tanjung Emas in Semarang and Jepara Kartini on the island of Karimunjawa.

From Port Kartini, Jepara there Muria Ship departing every two days, time crossing the economic ship is approximately 6 hour trip. schedule of the ship from the port Muria in Jepara Kartini usually depart Tuesday, Thursday, Saturday at 9 am and from Karimunjawa to Jepara Wednesday, Friday, sunday 8 o’clock. This schedule may change according to weather / waves on the sea of Java. case of high waves then the nexus at the port will not give permission voyage, and the schedule departure of the ship will change following the change in weather. Port of Jepara can also carry motorcycles and cars to ferried to the Publications. Economic Rp.80.500, VIP: Rp. Rp. 99,250, bringing the motor there is an additional charge of Rp. 75000.

Now there is a service ticket for Karimujawa with up to date time table-ticketing www.tiketkapalkarimunjawa.com
In Karimunjawa and Kemujan island, we can rent a motorbike / car to go around the island. To go to another island, we can use the local boat or boat motor.


Karimunjawa, What Will You Do There ?

Many tourist attractions in Karimunjawa, like the Turtles resort, providing diving activities. There are interesting places, such as Taka Gosong Panyawangan and fir, to dive in the water Karimunjawa.

Diving, Diving in Karimunjawa nice. Shipwreck the main attraction as we can see the fish here.
Snorkeling around the islands of Karimunjawa is very nice with beautiful coral reefs.
You can also swim with sharks in a fish pond on the beach, the pool is just a beach bordered by the collision of rock into a pond, the pond there are some sharks and you can swim with the sharks.


shark, photo by Simson Situmeang
Menjangan Besar Island, On the island of Menjangan Besar there is a shark breeding. You can test your courage by going to their breeding pond and swim with these sharks. No need to fear, because the sharks here are quite tame and friendly with humans.

Menjangan Kecik  Island deserves a visit for the waters around the island there are lots of colorful little fish are beautiful. This island has a beach and a beautiful sea floor with clear water and coral reefs. Inibagus Island for snorkeling.

Cemara Kecil Island and Cemera Besar Island, On these two islands there are many pine trees that might be the basis of the second name of this island. Another unique thing is the existence of the mainland beaches with white sand that juts into the sea.

Sea water aquarium. On the island of Menjangan Besar there is an area that has a sea water aquarium facilities. Here, we can enjoy the beauty of ornamental fish and the life of sharks and other fish.

Swimming, locations that can be used to perform these activities, among others, on the east and south of the island of Karimun, Kembar island, the western part of Tengah Island, Kumbang island, the southern and western island of Menjangan Kecil, and around the island of Parang.


Snorkeling at karimunjawa, photo by Simson Situmeang.
Sunbathing, almost the entire coastal islands with white sandy Karimunjawa a long coastline. This place is suitable to perform activities of sun, sand play, and watch the beautiful sunset or sunrise.
Fishing can be done around  Menjangan Kecil and Besar island, Kemujan Island, Tengah Island, Parang island, around Kembar island , Menyawakan island, and west of Bengkoang island.
You can also go hiking around the island to find many places around the island that provides a beautiful panorama.
Craft of the most wellknown in Karimunjawa is wood carving. We can find many shops selling various kinds of wood carvings. Many people also go to Karimunjawa to find Demandaru factory. Their belief that dewandaru plants can make their lives longer.
Accommodation.
Kura-kura Resort, located on the island Menyawakan. Covered by coconut trees and surrounded by white sandy beaches and coral reefs prestine. This is a high class hotel with facilities scuba.
Nirwana Sea Resort, a luxury resort with many amenities.
Mental Hideaway resort, south of the main island. With 8 + rooms planned, is scheduled to open in
Paradise Resort, time share vacations and private homes. With a private entrance from the main road you have the most stunning views high above the tree line overlooking the bay, national park and the outer islands.

Romantic Beach Escape, Enjoy the beauty of the sea Karimunjawa of your room. Enjoy dinner on the beach with people you love. The hotel is approximately 10 minutes away by car from Pier Publications. There are 2 types of rooms: Standard and Suite. All the bathrooms are in the room, as well as sea view and the hot water on type Suite. The hotel is also equipped with a dining table and gazebo on the beach that you can enjoy the food, looking at the ocean and hear the waves.